A Wellington museum director expects it will probably be months before the stolen "key to the city" turns up. 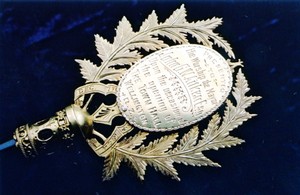 The key that was stolen from the Museum of Wellington City & Sea. Photo: WELLINGTON CITY ARCHIVE

The 110-year-old commemorative key is made of pounamu and gold, and was gifted to the city by a jeweller in 1904.

The key was discovered missing from its sealed case at the Museum of Wellington City and Sea this week.

Museums Wellington director Brett Mason said he suspected the key would end up in the hands of a collector or on an online auction website.

"The key may just turn up, either with a specialist that would collect things like that, or be offered it, or maybe even through TradeMe or one of those online auction sites.

"I'd imagine that they don't go out and sell these things straight away."

Mr Mason said the police were investigating and have taken fingerprints.