Pieces of Phar Lap's heart missing for more than 80 years have been discovered in the lead-up to a new exhibition about horses at the National Museum of Australia. 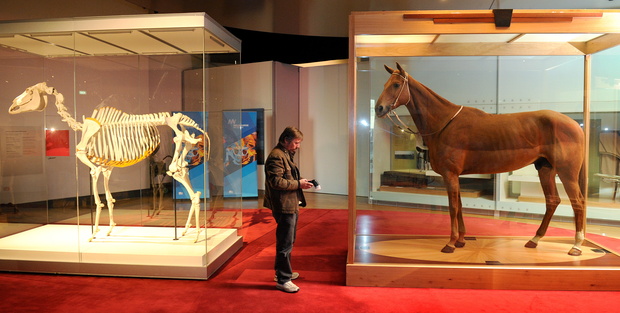 The hide and the skeleton of legendary racehorse Phar Lap appeared together at a special exhibition in Melbourne in 2010. Photo: AFP

The ABC reports that museum staff found parts of the aorta, a ventricle and the pericardium while searching through horse specimens in preserving jars that are part of a vast collection inherited from the former Australian Institute of Anatomy.

Phar Lap's astonishingly large heart was removed and placed in preserving fluid after the champion racehorse's sudden and suspicious death at a ranch in California in 1932.

His hide is on display at Melbourne Museum while his skeleton stands at Te Papa in New Zealand.