The Waikato Regional Council says the case of a dairy company fined for discharging effluent sends a strong message to a small but stubborn group of farmers who persist in polluting. 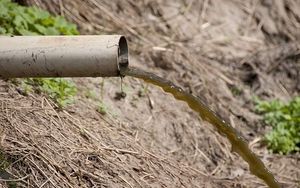 The comments follows a case in which a Waikato dairy company was fined more than $43,000 in the Hamilton District Court, with the sentencing judge warning that polluting farmers will face hasher penalties.

Brownsville Farms at Walton, a 147-hectare property near Matamata, failed to block up a hole in an effluent pond when told to by inspectors and instead let it leak out for three days until the waste dropped below the hole. On another occasion, another effluent pond overflowed into a stream.

The incidents happened on 9 September and 8 November 2013 and contravened the Resource Management Act 1991.

Judge Melanie Harland said Brownville's approach to the problem, was "less than satisfactory" and the offending was moderately serious. She took into account an early guilty plea.

The judge said she has been seeing these sorts of cases for at least five years and farmers polluting waterways could expect higher fines in the future.

The council's investigations manager, Patrick Lynch, says overall standards in the dairy industry have improved, but there is a small group that is not complying.

"The judge's comments just reflect here that perhaps more deterrence is needed, perhaps harsher fines are required, because we keep finding these and for this one end of the spectrum the message does not seem to be getting through."

Lawyer Kerenza da Silva says in her opinion, the rate of RMA compliance amongst dairy farmers is not increasing.

"Farmers aren't lifting their game generally across the board. Now there's a lot of farmers who are doing a good job, but there's a significant proportion of farmers that continue to discharge dairy effluent illegally. I think the main reason comes down to money."