The Christchurch City Council will go ahead with a feasibility study into building a $37 million swimming pool and sports facility on the site of the old QE2 pool. 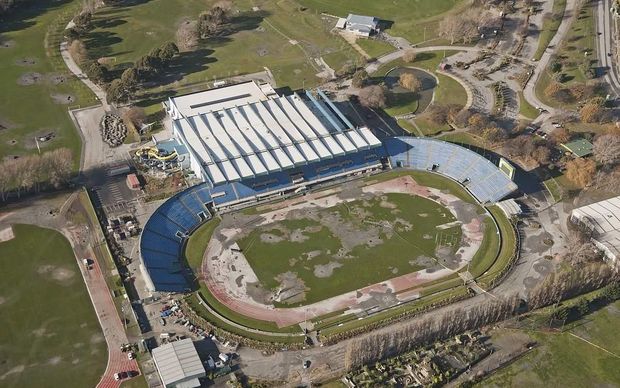 An aerial view of QEII park after the February and June 2011 earthquakes. Photo: AFP

The east of the city has been without a public swimming pool since the earthquakes - the first of which was four years ago today - forced the closure of QE2, the site of the 1974 Commonwealth Games.

Today's decision opens the way for a geo-technical investigation to be done of the old site to see if it's suitable for rebuilding a new facility and for the exact size and scope of the complex to be costed.

The old QE2 served as the main swimming pool for the whole city but the new one would be much smaller and aimed mainly at the eastern suburbs.

Staff have been asked to come back to the council with a feasibility study by the middle of next year.

Eastern Vision residents advocacy group spokesperson Evan Smith said not having QE2 had had a major impact on the side of town hit hardest by the quakes.

"It means for some of us we're not as fit as we used to be or have had to travel further afield for those sorts of services," he said.

"But also there's been an impact on family wellbeing, because there's not been that facility nearby. So there was an enormous hole in the social fabric of local communities."

Jo Zervos, a spokesperson for Keep QE2 in the East and a former QE2 aqua fit instructor, said having to possibly settle for a 25m pool instead of a 50m one, and not getting the athletics track back, was still a sore point.

She said the insurance money from QE2 should have gone back to rebuilding it on the same site instead of into a $250 million-dollar metro Sports Facility in the centre of the city.

"It's like we've been ripped off again. We've lost so much, you know, houses, jobs, friends, family, and then having the biggest asset which was the place in the east where a lot of the community would meet, losing that just added to peoples' woes."

Ms Zervos, who also sat on the advisory committee recommending the QE2 location, said a staff proposal to get back to the council with a feasibility study by the middle of next year was not good enough.

"They've had three-and-a-half years to do feasibility studies, and it's just adding another seven or eight months on top. And then we have to wait another two years for a build."

Ms Zervos wanted the feasibility study done by Christmas, and building to start soon after that.