The head of the United Nations says he cannot comment on New Zealand's chances of winning a Security Council seat, but this country's international contribution has been exemplary. 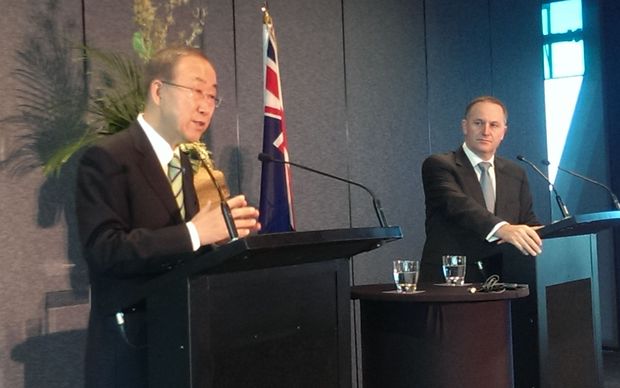 New Zealand is one of three nations competing for a two-year term on the council.

Speaking at a news conference in Auckland today, the UN secretary-general, Ban Ki-moon, said the vote was a matter for the member states of the UN.

But he said he was aware of the New Zealand Government's enthusiasm for winning a seat.

He said New Zealand had been actively contributing to international peace, development and human rights issues since the UN was formed.

Mr Ban, who's on a brief visit to the country, will give a speech at Auckland University tomorrow.

A lasting settlement in Ukraine will not come through military means, Ban Ki-moon says.

The rebels have begun a major counter-offensive in recent days that the Ukrainian government and its Western allies claim is backed by Russian forces - a charge Moscow denies.

Speaking in Auckland this morning, Ban Ki-moon said he was disappointed talks between Russia and the Ukraine lasted only two days.

"There is no military solution in this. There should be a political dialogue for political solution - that is the more sustainable way."

Mr Ban also addressed a decision by Australia to supply weapons to Kurdish troops in northern Iraq. Stopping short of direct criticism, he said states taking such action should ensure they had global support.

Further talks aimed at stopping the fighting in eastern Ukraine will resume in Minsk on Friday between Russia, Ukraine and pro-Russian separatists.

Ukrainian forces have suffered a series of setbacks, as pro-Russian rebels advance in the east of the country, the BBC reports.

Officials said nearly 700 soldiers had been taken prisoner since the rebel offensive began.

Earlier the military said government forces had been forced to withdraw from Luhansk airport, saying they had been attacked by a column of Russian tanks.

Ukraine's defence minister Valery Heletey said it was now fighting a "great war" with Russia in which tens of thousands could die.

He said rebels had been defeated and Russia had been forced to begin a full-scale invasion of the region with regular forces.

Some 2,600 people have died in eastern Ukraine since fighting began in April.