Police in Hamilton have confirmed a shooting in a supermarket carpark this morning, that left an officer and the gunman injured, is linked with a home invasion in Kihikihi yesterday. 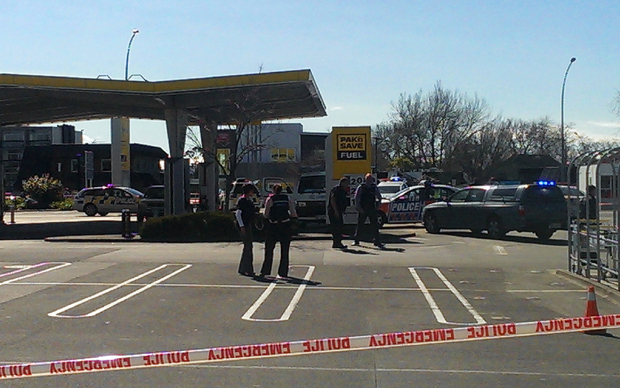 A police pursuit through the streets of Hamilton has ended in a Pak'N Save carpark, with reports of shots being fired. Photo: RNZ / Andrew McRae

Both the officer and the man are in Waikato Hospital with wounds to their lower legs.

Police said the injuries were not life-threatening. They said the gunman had been followed to the carpark by officers tracking a stolen van.

Police said he abandoned the van and confronted a woman and tried to steal her vehicle. Police dogs were trying to take him to the ground when the sawn-off shotgun he was carrying went off, hitting one officer and the man himself.

Police said the woman was shaken and was being helped by Victim Support.

Superintendent Bruce Bird said it was important the man was caught.

"The actions that this particular person has demonstrated over the reasonably short period of time demonstrates that he is a significant threat; he is a very dangerous criminal that had to be apprehended."

Mr Bird said officers found a jacket with all the impressions of a small improvised explosive device, which has been sent for analysis.

Mr Bird said his officers showed real bravery in an effort to protect the public.

"Both myself and the Commissioner of Police are in awe of the absolute courage and dedication to duty of our police officers who apprehended a person that we believe is and was a significant threat to our communities."

Mr Bird said a decision on charges will be made after the man is interviewed. 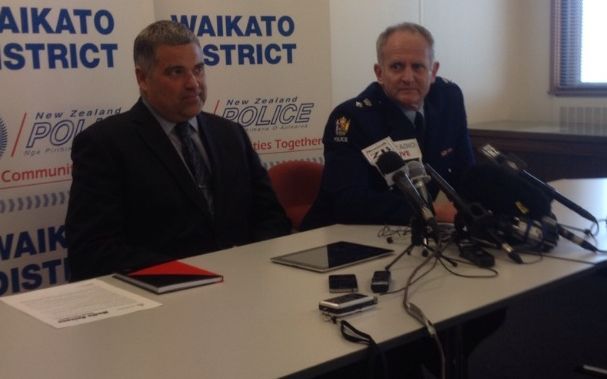 Eyewitness: 'I heard the gun go off'

Police initially refused to comment on this morning's incident.

But our reporter at the scene in Mill Street said the area was cordoned off, and it was understood a policeman had been shot in the foot after a pursuit. 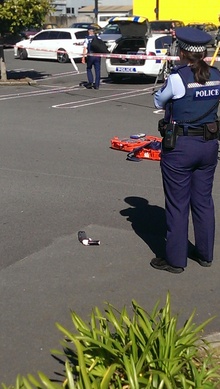 Police said the man's sawn-off shotgun went off, hitting one officer and the man himself. Photo: RNZ / Andrew McRae

Pak'nSave confirmed an incident happened at 11.15am. The store was open and trading but its fuel site was cordoned off and was likely to remain closed for the rest of the day, a spokesperson said.

Mark Strongman was in the supermarket carpark as the events unfolded this morning.

He said he heard sirens approaching as an agitated man got out of a van, holding what looked at first like a crowbar but turned out to be a shotgun.

Mr Strongman said the police turned up and tried to arrest the man.

"She had the good sense just to hang on to the wheel and stick her bum in the seat.

It was not clear until now whether the incident this morning was connected to the home invasion in Kihikihi.

In the Kihikihi incident, a man allegedly broke into a house - where children were at home - near Te Awamutu and stole a car after being chased on foot by police following a burglary nearby.

Officers were allegedly threatened with a firearm during that chase, police said.

They also found a jacket which had an improvised explosive device in it.

The car stolen from the Kihikihi property was found in Hamilton overnight.