New Zealand Rugby Union chief executive Steve Tew has apologised profusely to the fans who were injured during a firework display at Eden Park last night. 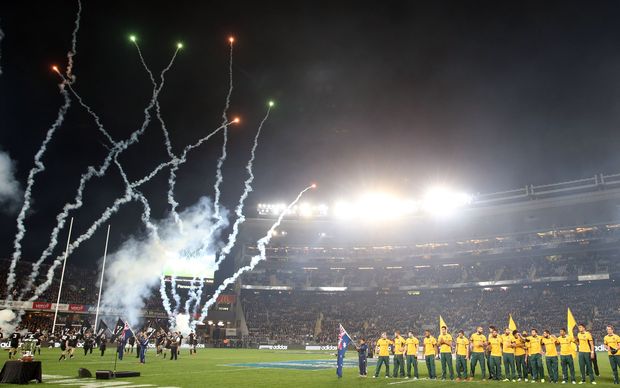 Van Tiel Pyrotechnics has been setting up displays for the Blues and All Blacks for more than 10 years without any incident.

During last night's display at the Bledisloe Cup test, three people were injured with one of those being taken to hospital.

The injuries happened during the firework display after the All Blacks had performed the haka.

Team coach Steve Hansen said neither he nor the players realised people had been hurt but he did notice the fireworks were louder than usual.

Mr Tew said the union was urgently conducting a review into what happened.

He has been in contact with two of the people who were injured, and hopes to contact the third to apologise personally.

Worksafe New Zealand said it had been notified about the incident and would look into in it, but said no decision had been made yet on whether to launch a formal investigation.

Van Tiel Pyrotechnics said it deeply regretted the injuries to three spectators and apologised to those who were hurt.

Director Martin Van Tiel said his equipment was locked down after the incident and remained at Eden Park, where it will would e examined tomorrow.

He said he is co-operating fully in an investigation by Work Safe New Zealand and the New Zealand Rugby Union.

A spectator injured in the incident was discharged from Auckland City Hospital last night.