A new report by an economic think tank says that at current construction rates, New Zealand will have a shortage of more than 100,000 houses by 2031.

Executive director of The New Zealand Initiative Oliver Hartwich said construction levels were much lower than officially forecast, which would have severe implications on future housing affordability. 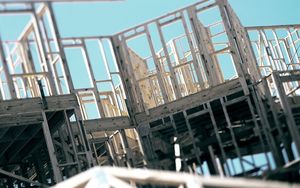 Dr Hartwich also said the country's ageing population was creating a generational housing mismatch, with large numbers of single-occupant houses and larger numbers of people crowded together in others.

"Anything that gets building rates up now is most welcome, but the scale of the problem is certainly not recognised yet."

He said pledges by political parties to build houses had come too late, and the country had a lot of catching up to do. Dr Hartwich said to address this, the way local councils were funded needed to be re-thought in order to speed up development.

Dr Hartwich said local councils did not have the capacity to deal with development, and did not get adequately compensated for infrastructure spending.

He said one solution would be for GST on new houses to go to local councils.

Child Poverty Action Group housing spokesperson Alan Johnson said there was no doubt a housing crisis was on its way.

He said making it easier for local councils to issue building consents was not enough.