New Zealand's longest and most expensive fraud trial, the five-month trial of three former South Canterbury Finance (SCF) directors, has wrapped up in the High Court at Timaru.

In the final stages, the court was told the defendants, like so many others, had perhaps placed too much trust, faith and reliance in the late chairman, Allan Hubbard.

Since March, former chief executive Lachie McLeod, 50, and former board members Robert White, 71, and Edward Sullivan, 73, have been on trial for their involvement in the company's 2010 collapse and the subsequent $1.6 billion Government bail out.

The trio entered not guilty pleas to 18 charges laid by the Serious Fraud Office (SFO), including theft by a person in a special relationship, false statements by a promoter, obtaining by deception and false accounting. In fighting these charges, they have sat through 61 days of evidence from more than 40 witnesses, heard dozens of written statements and, wrapping it all up, another 12 days of closing submissions.

Going back as far as 2008, when the global financial crisis hit, the then Labour government introduced the Retail Deposit Guarantee Scheme, principally to shore up the big banks and prevent the flight of domestic money across the Tasman where the Australian government had introduced a similar scheme.

SCF was accepted into the scheme in November of that year because it was seen as a stable proposition.

Four months later, the finance company's deposit base had increased by 25 percent, as depositors chased the higher interest rates being offered by the company, safe in the knowledge their money would be returned by the Government if the company went under.

Seven months in, deposits had grown to $800 million and the company's risk profile had grown through a series of loans to property developers.

By the time it was placed into voluntary receivership in August 2010, it owed depositors $1.7 billion.

Forced to honour the guarantee, the National-lead Government subsequently paid out $1.6 billion to 35,000 investors.

Throughout the course of the trial, the sceptre of Mr Hubbard has hovered, with much of the trio's defence reliant on blaming his business practices, or lack thereof.

Mr Hubbard died in September 2011, aged 80, in a head-on car crash. At the time, he himself faced 50 separate charges laid by the SFO. How he planned to respond to those, in defence or otherwise, will now never be known.

Numerous witnesses gave evidence to the fact Mr Hubbard had little interest in various accounting and legal restrictions placed upon him and the Crown case is that the three men knew that.

"Mr Hubbard had a disdain for disclosing related party transactions, a peculiar view of what constituted one, and a penchant for swapping cheques to cleanse the accounts," according to Crown prosecutor Colin Carruthers, QC.

Mr Carruthers summarised the Crown argument in saying that this is a case where the ordinary rules of accounting and business were evaded, ignored or outright broken.

"The defendants say that was Mr Hubbard's influence and that they were not dishonest. The business was run largely as Mr Hubbard saw fit. He was not sufficiently restrained from doing so, whether by directors refusing to go along or by them resigning (which would have brought attention to his business practices). Instead, those directors went along with his conduct and enabled it."

The Crown opened by saying there was a culture of obfuscation and dissembling at South Canterbury and "accounting records were backdated and related party loans were not disclosed".

It argued it was not a case about failing to act but that the defendants repeatedly chose not to tell the public the truth.

The Crown said the three men said there was nothing wrong.

"They signed prospectuses that falsely set out the company's position when they knew it was not so. They reiterated the information in those prospectuses to Treasury when it came time to enter the Crown Guarantee, because they knew they could not come clean. They made false entries in South Canterbury's own books. They carried out transactions in breach of the Trust Deed because Mr Hubbard wanted them to occur." 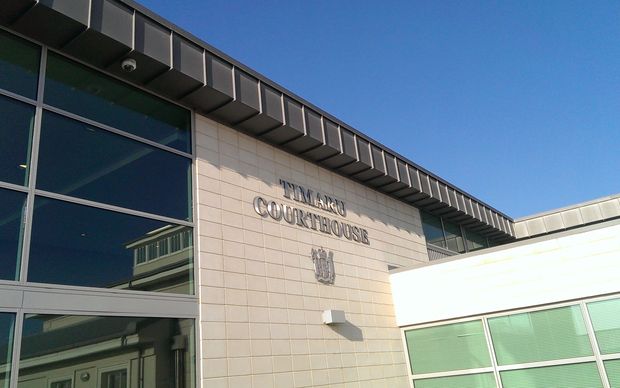 The trial was held in the High Court at Timaru. Photo: RNZ / Conan Young

During the trial, Justice Paul Heath heard Treasury admit that it should have carried out far more due diligence on SCF before it was approved for the scheme.

Treasury director John Park, a former manager of the scheme, said New Zealand was forced to follow Australia's lead in quickly introducing a scheme to shore up the country's financial institutions in late 2008.

Mr Park said SCF's eligibility for the scheme was measured by its investment statements, prospectus, annual accounts and credit rating. He said the Treasury and the Reserve Bank placed an enormous reliance on the accuracy of the information provided by the company's directors.

He conceded the shortfall was "enormous". The receiver managed to recover $1 billion in assets, but honouring the Guarantee cost the taxpayer more than $600 million.

Labour Finance Minister Michael Cullen delegated the management of the scheme to the Secretary for the Treasury while the general election was in progress, Mr Park said.

"There was an election in process, so the delegation enabled the scheme to kick off, if you like, process applications and make decisions on applications without being impacted at all by the normal conventions that operate during and post an election."

But Mr Cullen also said SCF's struggles became apparent in November 2010 when it applied for a two-year extension to the Guarantee.

He told defence lawyer Marc Corlett that the extension was approved despite obvious signs coming from the company.

"Am I right that by that stage, Treasury's assessment was that it was more likely than not that South Canterbury Finance would fail?" Mr Corlett asked. Mr Park replied: "Yes".

Mr Park said an extension was granted because excluding the company would have resulted in its immediate failure, leading to investors in other companies pulling their money out.

Pip Hall, QC, began the Defence's closing on 12 August by quoting a Latin phrase that translates as "fraud is odious and is not to be presumed". He told Justice Heath that in the course of the trial, that is precisely what the SFO and Crown have done.

Marc Corlett, who acts for Mr Sullivan, told the court the SFO investigation was so poor and incomplete that, in numerous instances, the defence has had to undertake forensic work necessary to discover the facts of the case.

Mr Corlett said the fact that the SFO did not interview the former Secretary for the Treasury, John Whitehead - who allowed the company into the Crown Retail Deposit Guarantee Scheme - was inconceivable.

He criticised the fanfare with which the SFO announced that charges were laid against the men in December 2011. He said the SFO made a "splash" in announcing the $1.6 billion fraud, and the media picked up on it 'gleefully' and have used it at every opportunity.

Mr Corlett said the three accused were never questioned by the SFO on their entry into the Crown Guarantee Scheme, which he said was mind-boggling, and the SFO did not bother to obtain any Treasury or Reserve Bank documents.

Mr Corlett disputed the Crown's allegation that Mr Sullivan deliberately hid a related party loan to Quadrant Limited so it could be left out of the company's prospectus.

Mr Corlett said the Crown had given no evidence, and only inferred that Mr Sullivan would have known he was in the wrong, which proved nothing beyond reasonable doubt.

Justice Heath said he did not see Mr Sullivan as someone who was naive in business.

"I can't see that there is any doubt that Mr Sullivan knew that Quadrant was a related party and that the indebtedness was about $40 million. And that even if he did not know what made up the $53 million, he ought to have checked."

Jonathan Eaton, QC, in closing for Mr McLeod, said allegations the company was at the centre of a billion dollar fraud trial are irresponsible and baseless, and the SFO was irresponsible in describing this case as the biggest fraud in New Zealand's history.

Mr Eaton said Mr McLeod was a man more inclined to roll up his sleeves and work long and hard rather than engage in unlawful shortcuts.

"Mr McLeod called eight character witnesses. Those witnesses spoke openly, honestly and compellingly of a man who does not have a dishonest bone in his body ... Mr McLeod was described as a man who is both kind and generous and certainly not a man of greed."

"Perhaps he was too loyal to Mr Hubbard. Perhaps he like so many others put Mr Hubbard on a pedestal and placed in him too much faith, trust and reliance. Loyal to a flaw? Perhaps. Loyal to the point of knowingly engaging in dishonesty? No. The proper verdicts on all counts are verdicts of not guilty."

Justice Paul Heath has reserved his decision and expects to deliver it on 14 October.

Robert Alexander White: A retired Timaru accountant was a SCF board member and director 1993-2009. Former partner at Hubbard and Churcher accounting firm since 1971. Mr White was the director for (Allan Hubbard investment company) Aorangi Securities from September 2003 to July 2008.

Lachie John McLeod: He was a former SCF chief executive between 2003 and November 2009.