SkyCity has announced approved concept designs for its international convention centre and revealed it will build another hotel in Auckland city centre.

The five-star 300-bed hotel will expand its precinct into Nelson Street with bars, restaurants and shops, and an airbridge between that hotel and the existing centre. 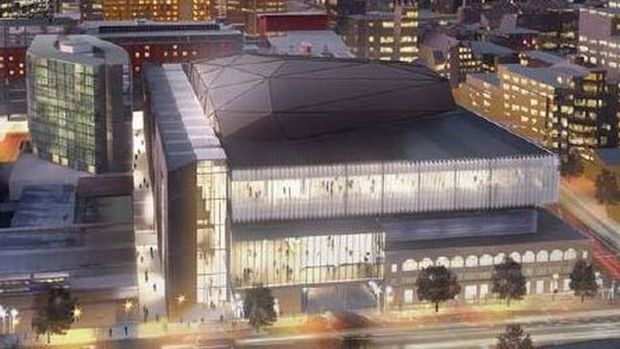 The company on Wednesday announced its full-year results, which show profits fell by 22.6 percent.

Chief executive Nigel Morrison said they are on track to apply for resource consent for the convention centre by the end of this year.

Mr Morrison said the centre would be great news for Auckland and New Zealand, despite the unease about the deal the Government did with SkyCity to make it happen.

SkyCity's casino licence was extended until 2048 and it is allowed an extra 230 gaming machines and 52 more gaming tables.

"Nobody else has stood up and said they'll build it. Sure, there's been a lot of political controversy but I think at the end of the day it's a great development for Auckland", Mr Morrison said.

"It will be embraced by Auckland - it clearly adds to the economic growth and the internationalisation of the city."

The centre will have four levels and the main theatre will have a capacity of 3000. The exhibition floor will be the size of Eden Park's pitch.

SkyCity estimates that the convention centre and hotel development will create more than 900 jobs in addition to 1000 construction jobs, and says it expects to attract 33,000 new international visitors.

SkyCity says it is not making any political donations before the election on 20 September.

The Labour Party described legislation extending its gaming licence and allowing extra gaming machines and tables as a shameful, dodgy deal that looked after the Government's mates and would hurt problem gamblers.

SkyCity made a $15,000 donation to John Banks during his failed Auckland 2010 mayoral bid.

But chief executive Nigel Morrison said on Wednesday the company is making no political donations to this year's general election campaign.