A fire investigator is questioning why smoke alarms were removed from inside a house, shortly after a routine Housing New Zealand inspection recorded them being there.

Police were alerted by a neighbour to the home ablaze on Clarkson Crescent in Otara soon after midnight on Monday. 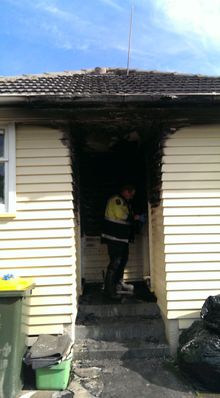 Fire investigators are questioning why smoke alarms were removed from an Otara property. Photo: RNZ

A man found inside was taken to hospital in a serious to critical condition; he is now stable.

Fire risk management officer, Phil Faidley, said there is extensive damage to the kitchen area and smoke damage throughout the house.

He said it looks like the smoke alarms had been removed prior to the fire.

Mr Faidley said they haven't ruled out suspicious activity, and are yet to determine the cause.