The police union is considering legal action over fitness tests, which it claims are being used to get rid of older officers. Front-line officers (constables, sergeants and senior sergeants) have been required since March 2013 to pass the physical competency test (PCT) every two years.

The association's national president, Greg O'Connor, said officers with health conditions or injuries which meant they could not pass the test had in some cases lost their jobs, including senior detectives, prosecutors and road police.

"Generally, in those cases, it has had no impact on their ability to do the job and enforcement of PCT has become something of a blunt instrument to essentially clear out some older police officers," he said.

The union was working with police to ensure the officers concerned were treated fairly, but the matter may end up going to the Employment Court.

Mr O'Connor said the union supported fitness tests for front-line staff, but there should be exemptions in those cases where physical fitness had no bearing on the officers' ability to do their jobs because the police force was losing valuable skills.

A police spokesperson, Superintendent Richard Chambers, said police bosses wanted all front-line staff to be fit and capable of doing their job.

He said currently over 98 percent of frontline staff had passed their fitness tests.

"We are happy to engage with the Police Association if it has concerns about the application of this policy." 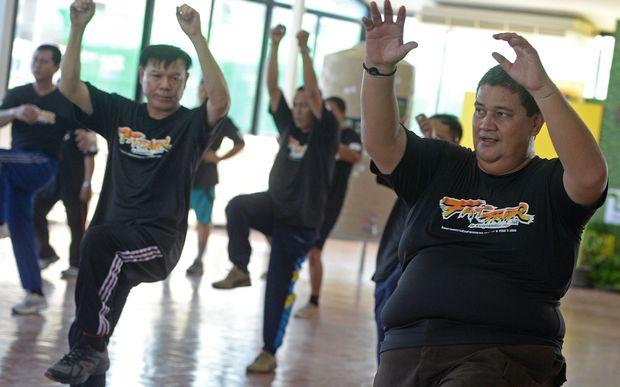 As bellies wobble and chubby limbs swing, Thai policeman, sergeant major Nitas Saisaard joins colleagues in an exercise programme at hospital in Bangkok. Dozens of sweaty cops exercise to pop songs as part of a scheme to reduce the number of overweight police in Bangkok. Photo: File picture - AFP