The brother of a man killed in Cambodia in 1978 said he is relieved two former Khmer Rouge leaders have been jailed for life by a United Nations tribunal.

New Zealander Kerry Hamill was killed in a Phnom Penh prison in 1978, after the yacht he was on strayed into Cambodian waters.

From 1975 to 1979, two million people died under the Khmer Rouge regime led by Pol Pot.

Rob Hamill said you never really know how courts are thinking, and the life sentences are a relief. He said it is never too late for justice to be served. 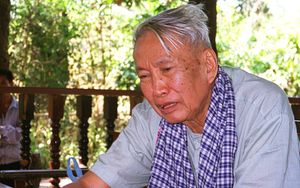 Khieu Samphan, the regime's 83-year-old former president, and Nuon Chea, its 88-year-old chief ideologue, face sentences ranging from five years to life for their role in the 1970s terror.

Prosecutors had sought life terms for the defendants, the most senior surviving Khmer Rouge officials, for their roles in the Killing Fields era.

Cities were emptied and their residents forced to work on rural co-operatives. Many were worked to death while others starved as the economy imploded.

During four violent years, the Khmer Rouge also killed all those it perceived as enemies - intellectuals, minorities, former officials - and their families.

Nuon Chea and Khieu Samphan said they will appeal their sentences and Mr Hamill said the men are deluded and he's disheartened at their move.