Fiji's prime minister Frank Bainimarama is making an electioneering trip to New Zealand this weekend in his first visit since his military coup eight years ago. 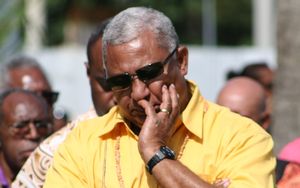 About 1000 mainly Fiji Indians living in New Zealand are registered to vote in Fiji's elections on 17 September.

Mr Bainimarama is due to make a campaign speech in Auckland, and host a dinner for business people interested in investing in Fiji. His supporters say it is a private visit paid for by Fiji First, after which he will go to Australia to meet the Fiji community there.

The Fiji leader will have no official meetings with New Zealand Government representatives.

Prime Minister John Key said he was comfortable with the visit, which follows the removal of travel sanctions earlier this year.

Foreign Affairs Minister Murray McCully said there will be "a basic level of facilitation" for Mr Bainimarama's arrival and departure.

The minister told Radio New Zealand's Morning Report programme he did not know how police plan to protect the regime leader, nor the details of the security staff he's bringing with him to Auckland.

The police will make their own, independent, decisions about how to handle security, Mr McCully said. Police said the did not discuss visitors' security arrangements.

Pro-democracy groups have said Mr Bainimarama will face protests over his human rights record, and Mr McCully said he was sure Fiji's leader will be briefed on possible protests.