It follows a fall of 8.9 percent in the price a fortnight ago. Prices are now 41 percent lower than in February, and are back where they were exactly two years ago. 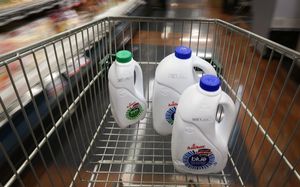 Farmers will be hoping the New Zealand dollar will continue to fall in order to offset the price drop. It's now sitting just over 84.6 US cents compared with 88 cents a week ago.

Federated Farmers' Dairy spokesperson Andrew Hoggard told Radio New Zealand's Morning Report programme on Wednesday there was still hope the global dairy trade will turn around in the near future in the mean time farmers will have to cope.

"I think the message has already gone out and everyone fully knows it, that we're just going to have to trim the fat off the system for this season, be vigilant on costs and focus on utilising all that grass."

A week ago, Fonterra reduced its forecast milk payout from $7 to $6 per kilo of milk solids for the current season, following earlier sharp falls in dairy prices.

AgriFax dairy analyst Susan Kilsby said long-term demand for dairy product was still strong, though at present there was less demand from China as it works through stockpiles bought earlier in the season.

ASB Bank economists have lowered their forecast milk price to below $6 per kilo of milk solids and are warning a payout of $5 is possible if dairy prices don't recover.

The 2014/15 dairy season is barely two months old, but economists at the bank have shaved 40 cents off their predicted payout to farmers - it now sits at $5.80 per kilo of milk solids.

Fonterra's forecast is at $6, however ASB said the latest fall means prices have now crossed the $6 dollar threshold. It said if prices stay near their current levels, the risk of a $5 payout is rising. However, it expects dairy prices to recover later this year.

ANZ rural economist Con Williams believes Fonterra's forecast payout to farmers could easily drop to $5.50 per kilo of milk solids or below after the latest significant price fall. This would take up to $4.8 billion off farm gate revenue compared to the last season's expected $8.40 payout.

Mr Williams told Radio New Zealand's Nine to Noon programme that this, coupled with higher interest rates, would be a trigger point for stress in the dairy sector.