The scenic flight company whose plane crashed near Alexandra on Tuesday, killing the pilot and injuring two American tourists, has suspended operations.

The owners or Glenorchy Air, Robert and Janet Rutherford, have paid tribute to Queenstown pilot Raymond Vivian Crow, saying the 56-year-old was experienced at flying in the mountains and had flown the route many times. 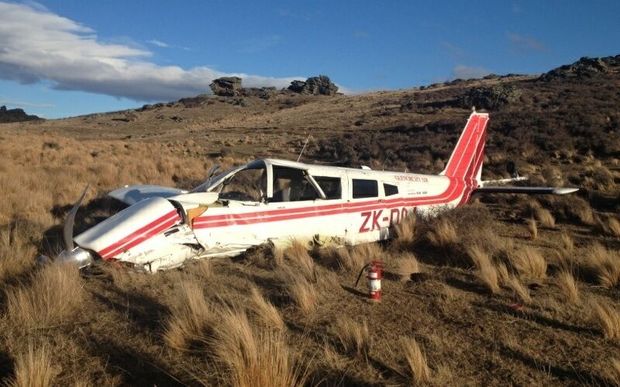 The plane crashed near a remote airstrip close to the Poolburn Dam. Photo: NZ POLICE

In a statement on Wednesday, the Rutherfords said the aircraft was on its expected flight path and the crash occurred just before it reached its next destination, the Poolburn airstrip.

Emergency services rushed to the scene near the remote airstrip close to the Poolburn Reservoir, after the plane's emergency locater beacon was activated at 3.40pm on Tuesday.

The injured American tourists, Sarah and Eric Hoffman, both aged in their 30s, managed to climb out of the wreckage to await their rescue. The pair from Houston, Texas, were on a sightseeing trip.

They were flown to Dunedin Hospital by the Otago Rescue Helicopter. Chief pilot Graeme Gale said they needed medical attention before being put on stretchers and taken to hospital. The couple are in a stable condition on Wednesday.

The plane was carrying three people and operated by Glenorchy Air, based in Queenstown, which offers Lord of the Rings inspired tours in the South Island.

Central Otago farmer Sue Faulkner owns the property where the plane crashed and said the operator has a good reputation and often takes people for scenic flights over her land to see the film locations.

The weather was fine at the time of the crash. A full scene examination is due to take place on Wednesday.

The Transport Accident Investigation Commission and Civil Aviation Authority are now in control of the investigation.