Public health and road safety experts are heralding the drop in the alcohol limit for drivers as a life-saver, but are questioning why the Government has introduced it with so little fanfare.

However, the hospitality industry and defence lawyers say Wednesday night's law change, which lowered the legal blood alcohol limit from 80 miligrams to 50 milligrams per 100 millitres of blood for drivers aged over 20, will criminalise moderate drinkers and won't stop recidivist offenders. 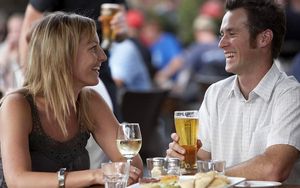 Moderate drinkers may now think twice about having that second glass of wine or beer. Photo: PHOTO NZ

Defence lawyer Andrew Davie says the limit is now so low that even one or two casual drinks will make someone into a law-breaker, when obviously their driving would not have been impaired.

"The real problem here is the recidivist who would be at twice or three times the limit - they are the people that need to be looked at more carefully rather than the social drinker who has one or two drinks and will now unfortunately fall foul of a very serious law."

"We were concerned that moderate, responsible people would be targeted and that they would respond by not feeling safe to have a couple of glasses of wine with a meal at a restaurant.

"If they continue to do what they've done and act responsibly, we're hopeful it won't have too much of a major impact."

Public health experts say the change brings New Zealand into line with other countries, including Australia.

Professor Doug Sellman, the director of the National Addiction Centre at Otago University, says there is finally an effective piece of law reform which will prevent dozens of deaths, hundreds of injuries and save the country millions of dollars.

However, he is disappointed by the low key way in which the Government has finally passed the legislation and suggests it is embarrassed about being associated with alcohol reform.

Labour's associate health spokesperson Iain Lees-Galloway, whose private members' bill was drawn last year before being taken over by the Government, says Ministry of Transport officials made the case for change as far back as 2009.

Mr Lees-Galloway says National has dragged its feet for fear of being labelled a nanny state. "Since 2009, we could have saved 15 lives had National been prepared to act on this sooner."

A spokesperson for the Automobile Association, Mike Noon, says over the five years to 2012, there were an average of 180 road deaths and 2112 injuries involving alcohol each year. "This is a good move. It will make our roads safer and we hope save some lives."

The father of a man killed by repeat drink-driver Gavin Hawthorne in 2003 says any lowering of the drink-driving limit has to be good.

Gary Fryer, whose son Lance died when Hawthorne's car smashed into a power pole less than a kilometre from his first fatal crash 10 years previously, says however there's no point catching more people if there are no resources to deal with them.

"It's going to take a hell of a lot to cure those people, the recidivist ones. But if we can catch the younger ones, if we can stop them now, nip it the bud early, we have a chance. But it gets back to resources, I think."

Mr Fryer says he and his family still miss Lance every day and never stop wondering what his life would have been.