The measles outbreak in Waikato has now spread to Northland.

Northland's Medical Officer of Health Clair Mills said measles was confirmed this week in a child who had not been immunised.

She said a Waikato family which had a confirmed case of the disease visited Northland this week, despite warnings by health authorities not to travel and risk spreading it. 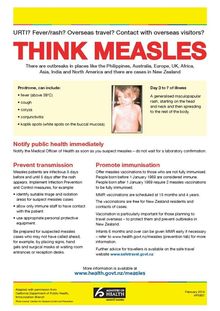 Public health officials are trying to stop the spread of measles Photo: SUPPLIED

Dr Mills said Northland Health is now following up 120 children and adults who had contact with the infected child.

She said 40 percent of those contacts are not immunised against measles, which is not unexpected given Northland's low vaccination rates. Parents whose children are not protected should ensure they get their free vaccination as soon as possible.

Dr Mills said there have been 265 cases of measles in the country so far this winter and more than one in ten people involved in the Waikato outbreak have ended up in hospital.