A booming wasp population is killing off more Monarch butterflies due to warmer weather in winter months, experts believe. 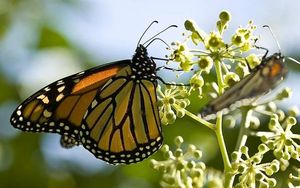 The Monarch butterfly is not native to New Zealand. Photo: PHOTO NZ

The Moths and Butterflies Trust says scientists have noticed far fewer Monarchs in parks and golf courses where they spend the winter months, while wasp populations are booming thanks to mild temperatures over the past two years.

The trust's secretary, Jacqui Knight, says wasps eat the caterpillars of the Monarch, which is not native to New Zealand.

Ms Knight fears the wasps could be feasting on other invertebrate such as insects, spiders, slugs and worms, which are essential for pollination and pest control for crops, water filtration and human health.

A recent international study, led by University College London, showed that invertebrate numbers fell by an average of 45 percent over the past 35 years, she said.