Air New Zealand is to give $1000 each to frustrated passengers stranded in Hawaii after their flight has been postponed three times due to engineering problems.

The airline has apologised unreservedly to the 227 passengers from Flight NZ9 which has been stuck in Honolulu since Sunday night. 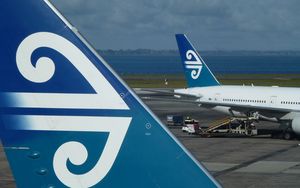 The flight has been delayed three times. Photo: RNZ

Passengers have gone to Honolulu Airport three times expecting to fly out, only to be told they couldn't. The airline will compensate them with either cash or Airpoints Dollars.

Air New Zealand said there has been a series of evolving engineering issues. It tried to find a replacement part from the American mainland, but was sent the wrong equipment, and one has been flown from Auckland on Tuesday.

Nearly half of the passengers were due to arrive in Auckland on a Hawaiian Airlines flight just after 10pm on Tuesday, while it's hoped the Air New Zealand plane would leave on Wednesday morning.

Passengers have complained about poor communication and having to find out about cancellations at the check-in desk.

One man from Christchurch, who didn't want to be named, said it was very annoying. "Everyone's feeling very, very frustrated, mainly due to the lack of communication, we gave over our email addresses, we gave over our phone numbers but we don't hear any information unless we ring them."

Aucklander Doug Wilson has been expecting his son, daughter-in-law and two grandchildren since Monday morning and they have been to the airport at least three times.

"And in fact they were telling me today that the last time they got to the airport this morning people refused to get off the bus, because it had been delayed yet again and they had nowhere to go."

Air New Zealand said passengers were put up at hotels on Saturday and Sunday night.

The airline said the world's largest military exercise, attracting 25,000 people, is on in Honolulu and passengers are spread out between hotels, making communication challenging.