A director of the company that owned a hot-air balloon that crashed in Wairarapa has admitted he should have been aware the pilot's medical certificate had expired.

Andrew Livingston was giving evidence at an inquest in Wellington into the crash which killed 10 passengers and pilot Lance Hopping. The balloon struck power lines and plummeted into a paddock near Carterton on 7 January 2012. 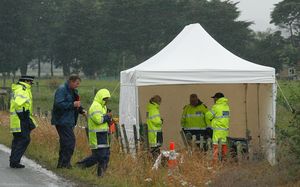 Emergency personnel at the site of the crash in 2012. Photo: AFP

Mr Livingston said on Monday that his company, Early Morning Balloons, had supplied Mr Hopping with a pre-flight checklist and other operational material.

He agreed no crew member could join a flight while affected by drugs and said it was his job as a director of the company to make sure that the pilot was fit and healthy and not a hazard to passengers.

Mr Livingston admitted that his lack of knowledge about the expiry date of Mr Hopping's medical certificate meant he had failed to uphold his duty to passengers to ensure they were safe. He told the inquest he would now do things differently, including ensuring drug-testing of the pilot.

The company's director, Sally Livingston, told the court on Monday there was no conflict of interest in her husband certifying the pilot.

Ms Livingston said Lance Hopping had been flying craft belonging to the company since 1997.

She said aircraft maintenance was the firm's responsibility. Her husband was an examiner for balloon pilots in the central North Island and tested Mr Hopping as part of that.

Ms Livingston said she found out after the crash that Mr Hopping's medical certificate had run out, but it was his responsibility to keep that current.

She agreed that Mr Hopping was responsible for 35 percent of her company's business, but did not believe that created a conflict of interest with her husband's role as a pilot examiner.

The inquest continues on Tuesday.