A special Board of Inquiry has approved a plan to build to a major new stretch of highway connecting Auckland to Northland. 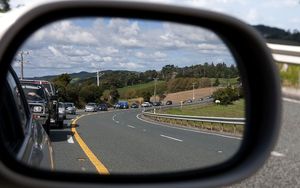 The Puhoi to Warkworth extension would cost more than $750 million to build.

The board was set up in November 2013 to assess the project, partly because it would mean significant changes to the environment. Two public meetings were held in April and June this year, with 187 submissions received.

In its draft decision released on Friday afternoon, the board granted the 15 resource consents sought by the New Zealand Transport Agency for the project. However, the draft consents come with an 86-page report of conditions that must also be met.

Mr Mutton says subject to conditions being met, construction could start in 2016 and take five years. He said the first part involves a four-lane, 18.5km stretch of motorway from the Johnstone's Hill tunnels to a roundabout near the Warkworth town centre.

"I travel this road every day, and even in the middle of July it's busy every day. This is the economic development road development for the north. It's not about Warkworth, it's about Northland - and we've been ignored for years."

Ms Webster said she gets angry when people call it the 'holiday highway', saying they obviously have no idea how many trucks go to and from Northland delivering freight.

The applicant and other parties now have 20 working days to make comments on minor or technical aspects of the report before the board releases its final decision on 4 September.

Read the draft report and decision

The Puhoi to Warkworth Board of Inquiry is chaired by retired High Court judge, the Honourable John Priestley CNZM, QC. The other four members are: Michael Parsonson, Alan Withy, Bronwyn Hunt and David Chandler. The board is independent of the Environmental Protection Authority and government ministers.