Poto Williams, Labour's MP for Christchurch East, says the Government is failing to fulfil its commitment to build 700 new houses by the end of next year. Ms Williams said that at the end of May this year, only 29 had been built. 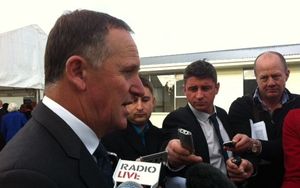 Mr Key told reporters in Christchurch on Thursday that 5000 state houses were damaged in the February 2011 quake and the Government is committed to repairing those by the end of 2015.

He said it is easy to be critical, but the Government has to deal with enormity of the housing challenge in Christchurch.

Four quake-damaged homes repaired by prisoners were opened in the city on Thursday. They are the first of 150 such houses to be refurbished by prisoners and community offenders at the Rolleston Prison Construction Yards over the next five years.

The first four have been transported to a Housing New Zealand site in Aranui and will be fully tenanted by the end of next week.

Mr Key said the project is an innovative solution. While rebuilding homes, prisoners are gaining skills that would hopefully help them lead a lawful life when they're released, he said.

The project is a joint initiative between the Department of Corrections and Housing New Zealand.

Housing Minister Nick Smith said 95% of Housing New Zealand houses were damaged in the quakes and this initiative is part of HNZ's $1.2 billion investment in Christchurch, which includes the repair of the 5000 homes and construction of 700 new ones by the end of next year.