A recent outbreak of measles in Waikato can in part be linked to a 16-year-old research paper which wrongly linked the measles vaccine with autism and gastro-intestinal diseases, public health officials say. 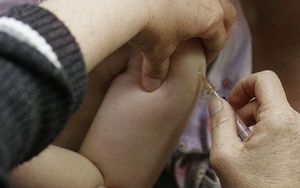 The paper, published in medical journal The Lancet, has since been discredited, and British doctor Andrew Wakefield who wrote it charged with professional misconduct.

To date there has been 114 cases of measles in Waikato.

Eighty percent of the reported cases are in people aged between 10 and 20 - the group which would have been due for the vaccine around the time of the fall-out from the Wakefield report.

Immunisation Advisory Centre spokesperson Helen Petousis-Harris said Britain had a high uptake of the vaccine before the report came out but immunisation rates here were lower.

"So for us to try and get our rates higher has been, perhaps, more of an uphill battle because of this myth that's lingered on," she said.

Waikato Medical Officer of Health Dr Anita Bell said she expected more measles cases to show up in the region.

"And whether it will continue to blip a few a week, or will it sort of start up again with another phase of the outbreak, so we're hoping the first but we have to be mindful that it could be the second, and be on our guard."