The head of Wellington Regional Council has "grave doubts" for a proposed rapid public transport system, now that the flyover at the Basin Reserve will not go ahead.

In its draft decision, an independent Board of Inquiry denied resource consent for the $90 million overbridge because of the adverse effects it would have on the urban area's heritage, function and appearance. 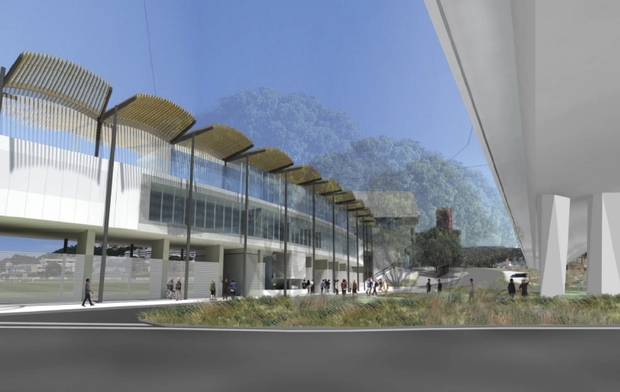 An artist's impression of the Basin Reserve Gateway building next to the flyover. Photo: NZTA

"I just have no idea how we will manage them, quite honestly. We're going to have to sit down with NZTA (New Zealand Transport Agency) and the council."

Ms Wilde said it was difficult to see how to build the proposed cycleway from the suburb of Island Bay to the city.

Wellington City Council spent hundreds of thousands of dollars of ratepayers' money on the proposed flyover. The head of the council's transport committee, Andy Foster, said the axing of the proposal puts other investments in the city at risk and sets back public transport in the city a decade.

The Wellington Chamber of Commerce said the flyover would have been a vital improvement for the region's transport infrastructure and the decision was hugely disappointing.

Transport Minister Gerry Brownlee also described the interim decision as disappointing, but stressed it was yet to be finalised.

Mr Brownlee could not say whether the $90 million earmarked for the flyover would now go to other cities. He said it was the only viable option to solve the capital's traffic woes.

The minister said he did not believe the decision represents what people want for the Wellington region and an alternative option, a second tunnel through the suburb of Mount Victoria, would only make traffic problems worse.

Applicants have 20 days to respond before a final decision is announced at the end of August, however it's unlikely to be significantly different.

The Labour and Green parties have hailed the announcement as a victory for common sense and sustainable transport.

People living near the cricket ground are celebrating the scrapping of the controversial proposal.

Chris Stevenson bought the penthouse at the Grandstand Apartments overlooking the Basin so he could watch the cricket from his house.

He spent tens of thousands of dollars fighting the flyover plan and is surprised and thrilled it's been rejected.

Across the road from the cricket ground, Regional Wine and Spirits owner Alistair Morris is also celebrating, saying the construction would have disrupted his business.