The lawns of Parliament have been decorated with for sale signs in a protest against foreign ownership and exploration of New Zealand's natural resources.

The protest on Tuesday is part of the environmental group Forest and Bird's 'On the Block' campaign.

He said the Government had a boom-and-bust approach to economic growth, which was unsustainable.

Mr Hackwell said the Government was selling the gas and oil exploration rights for 925,200 hectares of New Zealand land and 39 million hectares of ocean.

"They are for sale and it's New Zealand, it's our country, it's a conservation estate and it's also private land." 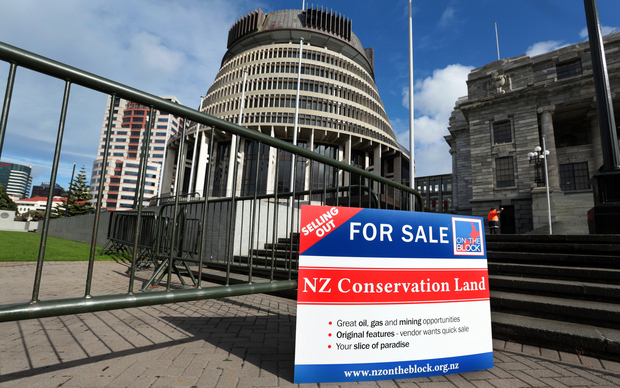 The protest aims to draw attention to the sell-off of the rights to log, drill and mine New Zealand’s public conservation land. Photo: RNZ / Diego Opatowski