A top English football team is dedicating its New Zealand tour to two ardent fans who were among the 298 people killed when a Malaysia Airlines flight was shot down over the Ukraine.

Newcastle United supporters John Alder, 63, and Liam Sweeney, 28, were on their way to New Zealand to follow the team when the plane was destroyed on Friday morning in eastern Ukraine. 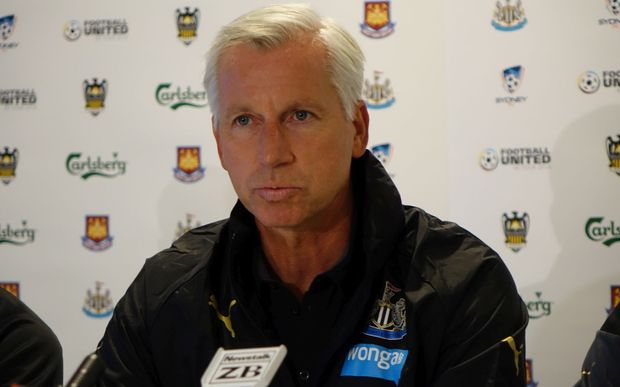 Newcastle United's pre-match news conference on Monday morning was sombre as they reflected on the loss of two of the club's most ardent fans; Mr Alder is said to have missed only one Newcastle match in 41 years.

Team manager Alan Pardew said the men's deaths were tragic and were affecting the team.

"Owners and managers come and go, as players do, but the fans are always there," Pardew said.

"These two guys, in particular, to go to the lengths that they were going to to come here, has brought home just how important they are to us.

"Sometimes it puts it into context what we do, when you lose lives in that manner."

Newcastle will wear black armbands and observe a minute's silence for the fans at the first match of a four-team pre-season series, which starts in Dunedin on Tuesday night.

"The most important thing for us is that we honour our support and do it in the right manner and do it in a manner that really means something," Pardew said.