Statistics New Zealand has revealed a snapshot of how the country's grocery lists have changed over the past 100 years.

It has released details about how food items on the Consumer Price Index have changed since 1914. 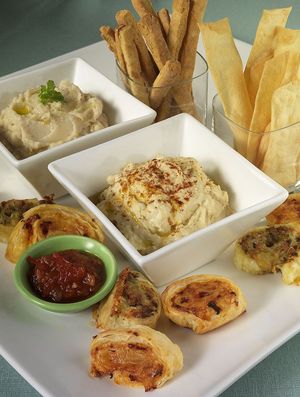 Hummus has been added to the Consumer Price Index in recent years Photo: PHOTO NZ

Tapioca, treacle, tripe and sago all made the necessities list when the CPI was established. They were cut in 1949 when their popularity waned.

That's also when the CPI started monitoring the prices of furniture and appliances, rather than just pantry staples to help determine wages.

"It's a bit of a pity because if you make a sago or tapioca pudding and jazz it up with some modern things like vanilla pastes and beautiful marscapone creams - they're absolutely delicious. But it's a textural thing I believe that people were turned off by it in the end and so they went with rice."

Statistics New Zealand puts those changes down to a more convenience-based lifestyle and a more multicultural society.

And when it comes to packaging sizes, flour and sugar have seen the biggest change. In 1914, flour usually came in a 25lbs bag, and sugar in a 56lbs sack. Today they're both around 1.5kgs or 3.3lbs.

Consumer prices fell 20 per cent in the five years to September 1934, because of the Great Depression.