An Australian soldier has died after falling about 40 metres down a crevasse on Aoraki-Mount Cook.

The man fell in the Grand Plateau area just before 12.30pm on Wednesday. Police have confirmed that the 44-year-old was a member of the Australian Defence Force and was with a party of 10 on a training exercise when he fell.

The soldier was above the Hochstetter icefall, on the east face of the mountain.

Local alpine guide Trevor Streat helped recover the body and told Radio New Zealand's Checkpoint programme that a lot of snow and wind in an area above the icefall had created bridges across some crevasses.

Mr Streat said he understood the soldier was probing a crevasse when he fell.

"The army guys did a really good job of getting down to the guy and they had him back out on the surface and were performing CPR when we arrived."

However, attempts to revive the soldier were unsuccessful and his body was flown to the Mount Cook Emergency Service Centre. His family is being contacted and the death referred to the coroner. 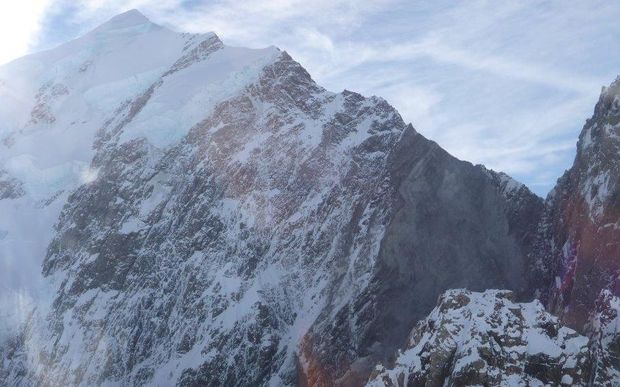 The large rockfall on the south face of Aoraki-Mt Cook was spotted on Tuesday. Photo: Department of Conservation

Climbers are being warned to stay off the South Face of Aoraki-Mount Cook after a big slip engulfed an unoccupied climbers hut. It was reported by a pilot on Tuesday.

The slip on the South Ridge, named the Hillary Ridge, swept down Noeline Glacier and over Pudding Rock. It knocked the Gardiner Hutt off its foundations and destroyed the toilet.

The Department of Conservation said it is working with GNS Science to see if the area is stable. Services manager Mike Davies said until that assessment is complete, climbers should avoid the area.

The department said there are no records of visitors intending to be in the area at the time, and aerial investigations do not indicate anyone that has been caught in the incident.

Mr Davies said the area is a remote location used only by experienced alpine climbers. The Hooker Track is not affected.