Tensions have risen further in the Bay of Plenty town of Opotiki, with more violent clashes on the streets and the sister of a man killed asking people to remain calm.

Joe Collier was found injured and died after a large fight on Goring Street on Sunday night, believed to have been gang-related. 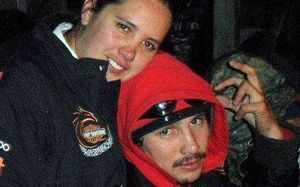 Officers were called to the brawl about 7pm on Sunday, and a few minutes later the 22-year-old was found collapsed in nearby King Street. He was taken to Whakatane Hospital in critical condition and died soon afterwards.

There has been further unrest on Tuesday, with six men and one woman arrested after an incident in the Bridge Street area about 11.30am. A man was taken to hospital with head and leg injuries.

Lisa Collier has pleaded with her brother's mates not to do anything stupid and retaliate, and for those causing the unrest to stop.

"(They) need to snap out of what they're doing because it's gonna hurt us - and that's what I'm trying to put out to my family. My brother's gone, tears are running down our cheeks, our hearts are shattered."

Police said scene examinations and witness interviews would continue for the next two days.

Opotiki mayor John Forbes has played down concerns of gang violence in the town, saying the trouble is being caused by a minority. A drive-by shooting believed to be retaliatory occurred on Monday, but no-one was injured.

"I think the appeals for calm that are going on are to a very small group of people who are looking at some tit-for-tat retribution around the sort of fighting that goes on from time to time."

Police have called in staff from Whakatane, Rotorua and Tauranga to boost patrols and help with the investigation. Inspector Kevin Taylor said police would continue to have a strong presence in the town to deal with any incidents that may arise.

However, Mr Forbes said the percentage of gang members in the area was very low, with 20 to 30 people involved out of more than 9000 residents.

Mr Forbes said it was not a problem that arrived overnight, but had built up over decades of unemployment.

"We've got some dysfunctional people that are a result of being tossed on the scrap heap I think many, many years ago. We have been working on a solution in terms of our local iwi being a shareholder in one of the world's biggest sea farms that's been consented off shore, we've got a consented harbour entrance project that is going to create about 350 jobs in the Bay of Plenty."