The receiver of failed company Ross Asset Management says he has some sympathy with investors angry at having to pay legal bills for New Zealand's biggest single fraudster.

David Ross was jailed in November last year after pleading guilty to charges laid against him by the Serious Fraud Office. His legal bills are being met out of assets. 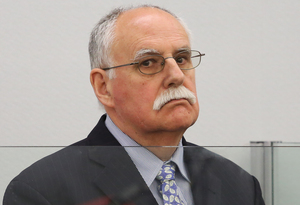 Ross was sentenced to 10 years and 10 months, with a minimum non-parole period of half that time.

The ponzi scheme he'd been running had collapsed, owing investors $115 million, and he had pleaded guilty to charges laid by the SFO and the Financial Markets Authority.

PricewaterhouseCoopers has paid Ross' lawyers Chapman Tripp almost $108,000, but receiver John Fisk said it is having a bill for $220,000 independently assessed because it appears to be too high.

"It comes back to the question of what would be a reasonable fee for the work that was carried out, given that Mr Ross had pleaded guilty to the charges.

"We wanted to get a better understanding on why they had got to the level they have in the first instance. It appeared to us those fees seemed very high."

An investor, Bruce Tichbon, said the bill is extremely high when Ross' guilt was clear cut.

John Fisk told Radio New Zealand's Checkpoint programme on Friday the decision to allow Ross to pay his legal fees out of his assets was made at the beginning of the court case.

"I have some sympathy for their (investors') views, but you would expect that someone would be entitled to defend themselves with the funds that they have under their ownership.

"This is money from his personal assets, and at that time obviously we didn't know what the outcome of any prosecution would be."

Mr Fisk said Chapman Tripp has yet to submit its bill for Ross's unsuccessful appeal earlier this year.