A former employee for a freighting company which has shut its doors says he feels betrayed by his employer. 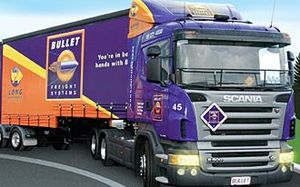 Bullet Freight Systems, which has seven depots throughout New Zealand, went into receivership on 4 July and folded completely on Tuesday, with the loss of 197 jobs.

Greg Johnston said he was devastated by the news.

"Grown men were crying. Everyone was very sad because one of the reasons that you go to work is the companionship of the people that you work with, and it's the people that we see on the front line, our customers," Mr Johnston said.

"You establish a rappour with people. Now they have no workplace so, yes, a lot of upset people."

Mr Johnston said the company had not treated fairly staff well before it closed.

"There was discontent with the way that we were treated," he said.

"It's been widely reported that the merger of the two businesses, Bullet Freight and Strait Freight, had created issues for management, the merging of the cultures and also the different operations. It was a bigger operation for the owners to deal with."

Mr Webb said he spoke to more than 50 parties about buying the company.

First Union organiser Rudd Hughes said most workers' contracts had no redundancy provision. The jobs lost were not high-paying ones, which meant workers were living payday to payday.

"It's a terrible time for these workers. They've had very little opportunity to plan for the future," he said.

"The company has kept them in the dark about the financial situation and the union is going to try and do as much as we can to help these people."

The union would contact other freight companies in an effort to find other jobs for those laid off, he said.