Northland's severe storm described as the "worst in decades" shows no signs of letting up, with more rain and wind until the weekend. Power remains out for thousands and water supplies are under threat.

The storm has caused "millions of dollars" of damage to electricity networks after hurricane-force winds since Tuesday snapped concrete power poles and felled massive trees from Cape Reinga to Kaiwaka. A Far North farmer described it as the worst since Cyclone Bola in 1988. 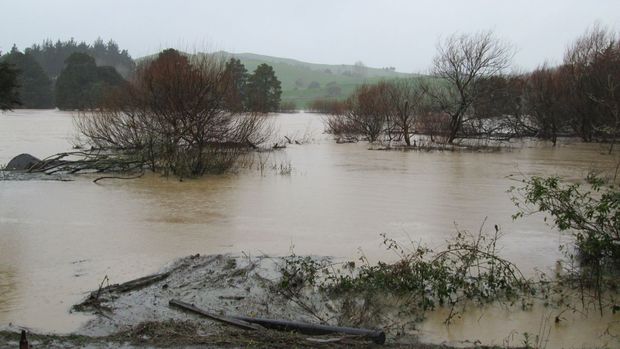 Looking across to Wrights Road in Pipiwai, west of Whangarei. Photo: Steve McMillan

The MetService said on Thursday night that Northland could get up to 150 millimetres of rain between now and Saturday morning, as well as winds that could reach gale-force in exposed places.

The winds are also likely to be strong in northern parts of Auckland, while heavy rain is also forecast for the north and west of the South Island.

Civil Defence in the Far North said catchments are saturated. Water supplies to several communities are under threat as floods and power cuts have taken out treatment plants.

District controller Alastair Wells told Radio New Zealand's Checkpoint programme that contamination of drinking water will be a concern for the next few days. He said a lot of water and wastewater plants aren't functioning normally, meaning water in reservoirs can't be treated.

Mr Wells said reticulated tap water is still safe to drink but communities in Hokianga and Kawakawa need to conserve it until the power is back on, with the message effectively the same for sewerage reticulation. He also issued a warning on contaminated water.

"The main thing with flooding is that if anyone's actually having to do any work or walk through flooded waters, there is a risk of contamination and they need to be very careful about that."

Mr Wells said with more fronts and thunderstorms predicted for the next three days, people should travel only if absolutely necessary.

Northland Health is warning people to stay out of waterways likely to be polluted. Medical officer of health Claire Mills said there would be a range of bacteria capable of causing illness in all floodwater as a result of the prolonged rainfall.

The Fire Service is warning residents still without electricity to turn off appliances to reduce the risk of fire. Far North area commander Allan Kerrisk said people should switch off everything except a light to alert them when the power is back on. Those using open fires to cook and keep warm should also take extreme care, especially in windy conditions. 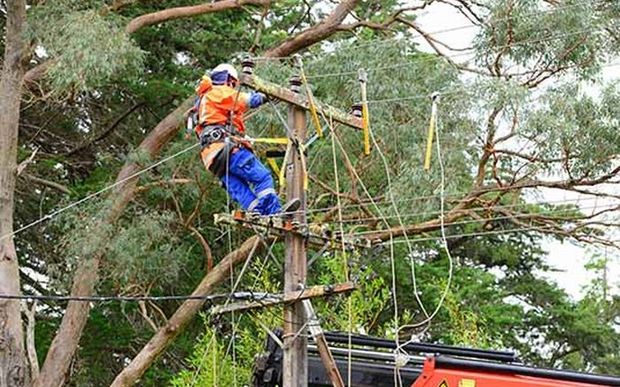 Damage 'in the millions'

Northland power company Top Energy was already putting the cost of this week's storm damage to its network in the "millions of dollars". Chief executive Russell Shaw said the storm was the worst to hit the region in a decade with, in many instances, large trees smashing concrete power poles in half.

Mr Shaw said 5000 homes in the region are without power on Thursday night. He told Checkpoint crews are having to rebuild whole sections of lines and it would be days before electricity is restored to all customers.

"We think it's going to be sometime in the weekend. We're very, very focused on getting it on. Our guys are doing a great job, but they're working long hours and many of them are going home to no power or hot water, then straight back out again. So we are managing their fatigue."

Mr Shaw said because of scale and duration of the storm damage, more power cuts can't be ruled out.

Northpower said just 200 of its customers are still without power on Thursday night, mainly in Kaipara District, down from 14,000 at the peak of the storm.

A linesman working for Northpower said crews have had to contend with strong wind and driving rain. Richard Ashby said gear to restore power across a 200-metre gully near Pataua, east of Whangarei, had to be carried in by hand on Thursday - but that turned out to be the easy part.

"The hardest part was getting that weight of the conductor back across that gully and back up by hand, so it's all lifting blocks and basically manpower to pull it up."

In Auckland, 383 are waiting to have their electricity restored, down from 16,900. Vector said its crews would continue to work overnight on Thursday. 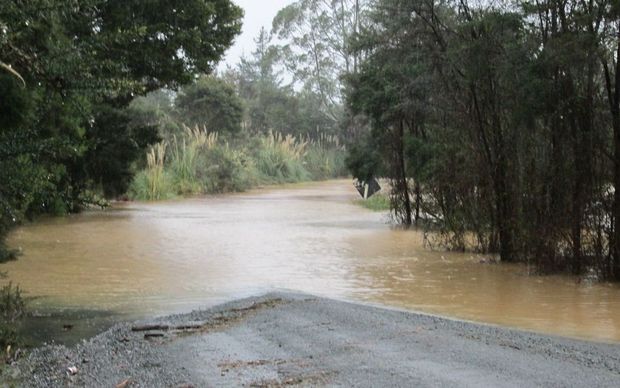 One of the region's many flooded roads. Photo: Steve McMillan

Phone and internet services were down in many places around the region on Thursday after the high winds and heavy rain which is hampering crews trying to reach some of the tower sites with replacement power generators.

About 4000 Telecom customers in Northland and Auckland are still waiting for their phone and internet services to be reconnected after the storm took out 12 cellphone towers.

A spokesperson said about 1000 were reconnected by late on Thursday night, with crews managing to connect replacement power generators to some towers.

Nine Vodafone cell sites across Northland were also out of action.

St John Ambulance said on Thursday that damage to a radio network site has blacked out radio communications between ambulance crews and the communications hub. Crews are being dispatched and receiving updates via cellphones, but because several cellphone towers are out of action, they now have satellite phones as back-up.

St John said the problem does not affect incoming emergency calls and won't impact on patients.

Far North farming leader Ian Walker described the storm as the worst since Cyclone Bola in 1988. He said barn roofs around the north, including his, are sitting in paddocks, the pasture is drowning and orchardists have taken a big hit with crops and trees on the ground.

Mr Walker, who farms near Kaitaia, said clean-up efforts are being hampered by bad weather and the failure of phone and internet services in many parts of the region. 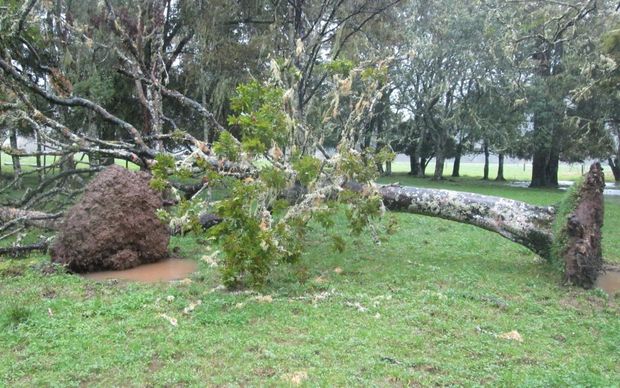 Trees down at Pipiwai west of Whangarei. Photo: Steve McMillan