Survey company DNV has signed off interisland ferry Aratere as ready to sail, but it's not expected to make its first freight crossing until later in the week. 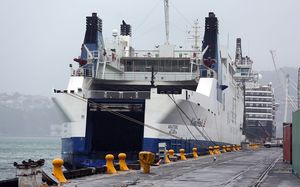 A propeller fell off the ferry during a crossing from Wellington to Picton last year and it has returned from being repaired in Singapore.

KiwiRail considered a trial sailing on Wednesday night, but has delayed this until Thursday to get all crew re-familiarised with the ferry. It planned to start freight sailings later this week.