An auction of donated sheep and cattle has raised just over $22,000 for the two North Otago farmers whose stock were slaughtered in overnight raids in June. 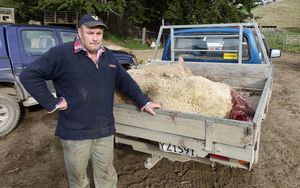 Peter Stackhouse lost 195 sheep valued at $30,000 after they were shot at and killed at his Ngapara farm over two nights, while 23 breeding rams and ewes were shot at John Dodd's farm 2km down the road a week later.

Federated Farmers called for donations of stock to help the men, with 168 sheep and a few cattle auctioned at the Waiareka saleyards in Oamaru on Monday morning.

One of the appeal's organisers, Greg Ruddenklau, said bidders paid good prices for the stock, with sheep fetching an average of more than $100 each.

Mr Ruddenklau said stock came from as far away as South Otago and South Canterbury, and a good number locally as many people know Stackhouses and Dodds.

Donations have also been flowing into an appeal account set up by Rural Women New Zealand. At last count, about $8000 had been received.