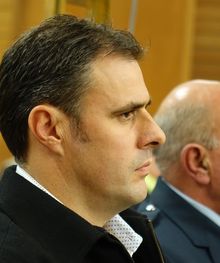 Adam Dunnett was off-duty when he assaulted the teenagers. Photo: RNZ / Peter Fowler

The 38-year-old, who was a community constable in Flaxmere, was found guilty in May this year on six counts of indecently assaulting the teenagers aged about 16 at the time.

In the Napier District Court on Thursday, Judge Les Atkins refused a defence request to grant home detention, saying the sentence needed to deter others who have contact with young women in the context of a voluntary organisation.

The judge said if there had been fewer victims home detention may have been appropriate, but he said prison was appropriate because of the number of victims and their vulnerability due to their age.

The assaults occurred at drunken gatherings at the Ocean Beach Kiwi Surf Lifesaving Club where underage drinking took place in the presence of adults such as Dunnett in 2011 and 2012.

Dunnett was off-duty when he assaulted the teenagers and was a volunteer lifeguard director at the time the assaults occurred. Following the guilty verdict, Dunnett resigned from the police and is unemployed.

The court was told that in one case, he lay down beside a girl late at night and touched her breast. Dunnett admitted sexual contact with that teenager on Christmas Eve 2011, but claimed it was consensual. He also admitted buying alcohol for her. That victim told the court that every Christmas she now has a sick memory of what Dunnett did to her.

"I should be able to trust the police, but it is hard now one has betrayed by trust," she said, echoing statements from all the victims who said they had lost trust in police as a result of Dunnett's actions.

Dunnett put his actions down to being intoxicated and said his moral compass was broken as a result. Another victim told the court she had been diagnosed with severe anxiety as a result of being sexually assaulted and had become suicidal and had attempted self-harm.

"I had severe and prolonged feelings of dejection. I lost all hope and will to do a lot of things. I ended up in hospital at one point, triggered by friend's friend committing suicide. I wanted to join the girl I had never met. All because of you. I felt alone, scared and vulnerable," she told Dunnett in court.

That girl is taking medication for depression and she said her father is paying for treatment, which has caused the family financial hardship.

Another victim told of waking up yelling and in tears because she had a nightmare about what has happened.

There was a large presence in the public gallery which included supporters for Dunnett and the victims and their supporters.

At various points, some victims stared straight at Dunnett while giving an impact statement, but he sat emotionless and avoided eye contact.

Ms Venables said the public rightly expects high standards from officers and police won't hesitate to take appropriate action against those who do not meet these standards. She said the sentencing ends a lengthy investigation process on behalf of multiple young victims.

"Obviously people form their own view about what did and didn't happen. And that's been very difficult for a voluntary based club that has got a lot of history in Hawke's Bay to deal with. It's compounded by the fact that dealing with sexually related matters is extremely sensitive and difficult anyway, so it has been difficult for the club to deal with - that's what I've been advised."

"He endeared himself to everybody. I loved working with him, I enjoyed his company."

Mr O'Keefe said Dunnett's behaviour at the time gave him no cause for concern.