The mother of a murdered Auckland woman confronted her daughter's killer on Thursday, telling him she wishes she'd never let him into their home.

Karl John Eddy must serve at least 17 years of a life sentence imposed for violently murdering his former girlfriend Alicia McCallion in what the Crown called an "execution-style killing". He had denied killing the 23-year-old, who was found in her in a sleepout at her parents' home in Papakura in December 2012. 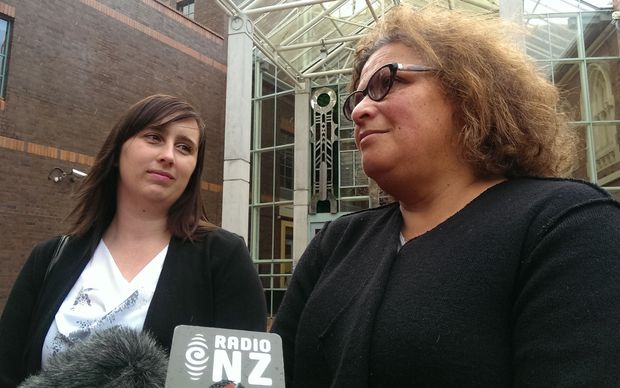 The 40-year-old was found guilty in May this year of repeatedly stabbing Ms McCallion and then cutting her throat. He has a 26-year history of offending including assault, breaching protection orders and threatening to kill.

Crown lawyers told his sentencing in the High Court in Auckland on Thursday that Eddy and Ms McCallion broke up after two years and she had rejected his efforts to reconcile. They said Eddy was calculated in planning what they called an "execution-style killing".

The court was told the unemployed man left a bloody fingerprint on the door on the morning of her death.

During sentencing, Justice Ellis said Eddy knew that Ms McCallion was scared of him.

"There were signs of a struggle, although it seems it did not go on for long. You are much bigger than she was no doubt taken by surprise. As you were holding her you stabbed Ms McCallion's abdomen several times with a serrated knife, then you cut her throat almost from ear to ear."

Peter McCallion told the court he views his own life as a failure because he couldn't protect his only daughter and likened Eddy's actions to a terrorist attack on his family.

Sister-in-law Korrinna McCallion said Eddy had ripped away from her everything that was important.

Millie McCallion told Eddy she has flashbacks of finding her body on the floor and wishes she'd never let him into their home. She told the court had been admitted to hospital since her daughter's death for overdosing on anti-anxiety medication, and felt battered and bruised as a mother.

Outside court, she broke down when speaking to reporters. "God forgive me, but I suppose closure would come if he was being laid down into the ground. That's a terrible, terrible thing to wish on somebody else - I'm sorry."

Before sentencing Eddy, Justice Ellis told him that he was cowardly, weak and the worst thing to ever happen to Alicia McCallion.