Police are concerned North Otago farmers will start armed patrols to try to prevent further shootings of their stock.

Twenty-three rams and ewes have been found shot on a Ngapara farm, less than 2km from the farm where almost 200 were shot a week ago. 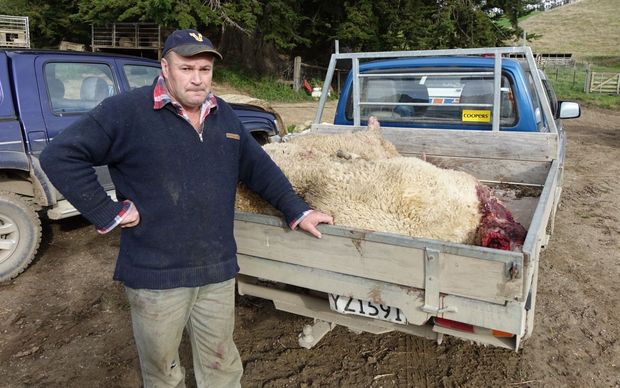 John Dodd is worried there may be another attack. Photo: RNZ / Ian Telfer

The first attack in late June occurred on Peter Stackhouse's farm where195 sheep valued at $30,000 were shot and killed over two nights.

On Monday, John Dodd was stunned to discover his stud rams and ewes-in-lamb dead or walking wounded on his farm. He said his property has been invaded and worries there may be a third attack next weekend.

Mr Dodd told Radio New Zealand on Tuesday he believed the only reason someone would kill his sheep was because they enjoyed it. He said given the isolation of the paddocks where they were killed, the person responsible would have to be very fit.

He said the loss is a blow, as it would take a long time to breed up the genetics his stock had.

Detective Warren Duncan said it looks like the weekend shootings have both happened at night, but it's not clear whether the shooter was acting alone or with others.

Mr Duncan said police are aware of the effect on the community, but people need to trust them.

"We don't want to see farmers out there with guns in their utes patrolling around. That is just going to lead to absolute disaster and it needs to be left with police to deal with in an organised and professional manner."

Police would consider preventative measures for the area later in the week, he said.

"They don't appear to be taking the stock for food or anything else. There's no gain for the people who are doing this. I think that's what concerns the community most at the moment."

Mr Strang said the motive remains a mystery. "There doesn't appear to be any connection between the two. The only thing in common we can see at the moment is that it's small sheep - lambs and hoggets - that are being targeted."

He said he visited the Dodd's farm on Tuesday. "They're pretty upset, they're pretty annoyed, they're puzzled and I think they're pleased to know they've got the support of the people around the community."

A fundraising appeal for the Stackhouse family would be extended to cover the Dodds, he said.