A New Zealand Vietnam War veteran is calling for more assistance to be given to veterans who served in the conflict. 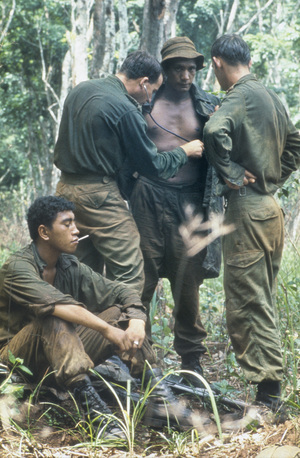 An Australian medical officer treating members of the New Zealand W Company during a resupply in the field during the Vietnam War. Photo: AAP / AUSTRALIAN WAR MEMORIAL / EKT / 69 / 0015 / VN

It's the 50th anniversary of the first deployment of New Zealand Forces to South Vietnam on Sunday.

Over an eight year period, 3500 military personnel served in Vietnam. Thirty-seven were killed and another 187 were wounded.

Ray Beatson, who served in Vietnam in 1967 said many of the veterans, who are in their late sixties and seventies, were not in good health, as a result of the effects from the defoliant, Agent Orange and the stressful conditions they worked in.

He said there were many veterans who hadn't put in claims to get the assistance that they needed because it was too hard and too much of a problem mentally.

Mr Beatson said the apology given in 2008 for the way Vietnam veterans were treated on their return home went a long way to help them feel truly recognised for their service.

He said many Vietnam veterans believed that over the last 50-years, successive governments had failed to fully address the health concerns of them and their families.

Mr Beatson said their concerns also related to veterans of other conflicts since Vietnam.