A women's health advocate says a Government inquiry should be held to determine whether regular breast screening is necessary for women.

The author of an article that sparked a malpractice inquiry in the late 1980s, Sandra Coney, said the benefits of breast screening had been overstated in New Zealand and women were undergoing treatment for cancer unnecessarily. 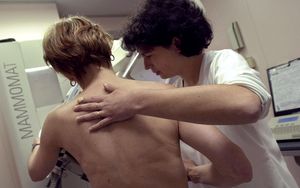 In New Zealand there is free screening for women aged between 45 and 69. Photo: AFP

She said research from Switzerland had shown that for every 10,000 women screened, 43 deaths were prevented.

Ms Coney said better rates of survival that have been attributed to early screening ignore improvements in medical treatment in the past decade.

Another public health expert wants the Ministry of Health to reconsider the age at which its screening programme starts.

Free screening for women aged between 45 and 69 costs taxpayers more than $50 million a year.

Associate Professor Diana Sarfati from the University of Otago said though there is some evidence that screening in women over the age of 50 can reduce deaths, authorities need to start being honest with people about the potential downside.

Early detection does not always lead to improved survival because many cancers would never cause a problem, she said.

"Everyone's got a story about a younger woman who has developed breast cancer or who had died from breast cancer, and there's the sense that if only they'd been screened that would've made the difference. But what the trials tell us is that screening for those younger women doesn't really make a difference."

But the Breast Cancer Foundation defends the screening programme for younger women. Spokesperson Belinda Scott said early detection does give women the best chance of survival.

"Screening is still the only way we can actually find breast cancer really, really early and therefore allow women the chance of being able to remove their tumour at an early stage."

Dr Scott said the survival rate in New Zealand has increased to 85 percent due to screening and good treatment.