A student who challenged his suspension from school for refusing to cut his hair has won his case at the High Court in Wellington. 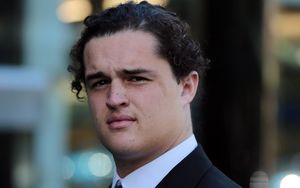 In May this year, St John's College in Hastings suspended Lucan Battison for breaching a school policy requiring him to have short hair.

His parents went to the High Court in Wellington earlier this week asking the court to review this. Following the hearing he was allowed back to the college, pending a final verdict.

The Battison's lawyer told the court the school's rule about the length of students' hair breached Lucan's human rights.

However, a lawyer for St John's College said the Battison family had signed a commitment to abide by the rules when he enrolled.

In a judgement released on Friday, Justice Collins ruled in favour of the Year 12 student. He found that the suspension was unlawful and that the school rules on long hair were unclear.

The judge said that legally, students can only be suspended if their behaviour constitutes gross misconduct or continual disobedience, and that sanction should be reserved for truly serious cases.

Justice Collins said that the school's hair rule is not lawful because it is capable of being interpreted in different ways by the school staff, parents and students. He awarded costs to the family.

St John's College board said on Friday it is disappointed and would take time to consider the ruling's impact, including on other schools.

"It is not about the individual student but being able to manage our school in a positive equitable environment, this includes compliance with our rules," it said in a statement.

The Battisons also issued a statement on Friday thanking the court for a fair hearing. They said they have taught their son to stand up for what he believes in - which is different to not respecting rules.

"Lucan could've been not permitted to play for the first XV, detentions. There could have been other options, some form of other inducement. So those type of options it reinforces a principal's responsibility generally just to take a cool head, just tai ho, consider all options. We're talking about a student's education."

Mr Bates said he has told the family to ignore negative comments being directed at them on social media and other outlets. Some comments, especially on talkback radio, have been venomous, he said.

While we are pleased by the judgement of Justice Collins, we are still disappointed it had to go to the High Court. Our preferred option all along was mediation.

We do believe rules have a place. But they need to be reasonable and certain. Lucan has had the same style for three years at St John's.

In 2014 when girls' hair lengths at school aren't questioned, why should the rules be different for boys?

Despite what has been said in the media. Lucan never broke the rules. The rules, which we signed up for, were 'off the collar and out of the eyes". Lucan's hair, whether in a hair tie or not, has conformed to this, but the new principal shifted the goal posts. In this case, unfortunately, it is the school that did not follow the law.

We'd like, in particular, to thank Justice Collins for giving us a fair hearing. He heard the full extent of our case and as a result has made this judgement accordingly.

However, if we didn't think St John's was a good school, Lucan would have been quite happy to change schools. We admire and thank his teachers for their support.

If people never questioned certain issues, we would be a very backward society today.

We'd also like to thank all the people who have supported us - our family, friends, our lawyer, the school community of St John's, and complete strangers. We have been overwhelmed by the number of phone calls and emails.

The criticism we have received as parents has been hurtful and unnecessary. We love our son and we've always taught him to stand up for what he believes in. This is different to not having a respect for rules. He wears his uniform with pride and that will not change.

All Lucan wants is to continue his education and get back to playing in the 1st XV.