A 6.9-magnitude earthquake has struck near New Zealand's Kermadec Islands at a depth of 20km, the US Geological Survey says. 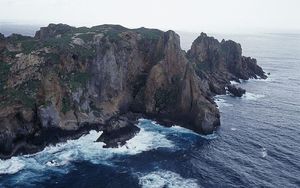 The USGS initially put the magnitude at 7.2 before revising it downwards. The epicentre was 96km south-southeast of Raoul Island.

GNS duty seismologist Carolyn Holden told Radio New Zealand's Morning Report programme there was some initial concern for Raoul Island because of the size of the quake, but there was no tsunami threat to New Zealand.

Six Department of Conversation staff and volunteers are working on Raoul Island. A spokesperson for the department said they felt the quake but there was no damage, and the staff are very used to earthquakes there.

Raoul Island is the biggest in the Kermedecs group of islands which are between 800km and 1000km north-east of New Zealand.

The Kermadecs are made up of a chain of about 80 volcanoes, stretching for 2600km between Tonga and New Zealand. The area is well-known for volcanic activity and earthquakes.

A large quake also struck in the far north Pacific Ocean near the Aleutian Islands on Tuesday.

The magnitude 8 quake was 114 kms deep and centred about 2000 kms west of Alaska.

A local tsunami warning for parts of the Alaskan coastline was issued.

GNS said the quakes were not related.