The Auckland Council has rejected a $75 million offer for its Downtown Carpark Building, saying it is not for sale.

Tournament Parking last week made a surprise offer for the 2000-park building on Auckland's waterfront, but said it needed a decision within a week. 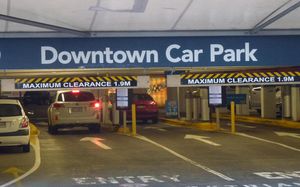 The council says public consultation is needed before the carpark can be sold. Photo: RNZ / Todd Niall

Council chief executive Stephen Town said if the building was to be sold in the future, there would first be public consultation.

The council is returning a $7.5 million cheque which Tournament Parking had delivered, saying the council needed only to bank it to clinch the deal.

The offer was made while Auckland mayor Len Brown was out of the country.

On his return, Mr Brown said the offer looked light and that if such an asset was for sale the council would seek wider expressions of interest from the market.

Tournament Parking's owners said on Monday they are disappointed, but accept the council's decision.