Councils should make sure fast-food chains are not set up close to schools as part of several measures it is proposing to tackle obesity, the Medical Association says.

In a report released on Monday, the association said efforts to target the "epidemic" had failed. It has made 10 recommendations, including regulating the marketing of unhealthy foods, introducing traffic light labelling and establishing nutrition guidelines for school canteens. 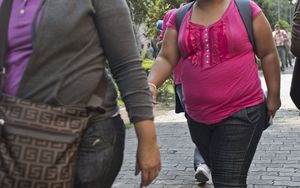 The traffic light system uses green, amber and red symbols to indicate food contents such as fat, sugar and salt.

Association chair Mark Peterson said on Monday that councils should audit where fast-food stores were set up - particularly in relation to schools and leisure centres.

"Having lots of fast-food places around schools just encourages people to look to the less-healthy options perhaps in terms of eating both before and after school, and maybe at school itself."

President Philip Harding said says young people who want takeaways will find a way to get them, or go to a supermarket to get similar food.

Though he supports the association's report, the best way to target the issue is through education, he said.

Health Minister Tony Ryall says there are plans for a tax on high-sugar drinks and regulating for food marketing, as recommended in the report.

Report co-author Valery Feigin said taxing unhealthy food is a proven solution and the Government needs to get involved.