Syrians living in New Zealand say the last thing their people want is residents of other countries joining the fighting in Syria's civil war.

A Syrian government representative at the United Nations on Sunday said a New Zealander has died fighting as a terrorist in Syria and it had provided consular support in relation to the case.

But Ali Akil of the New Zealand based group Syrian Solidarity has told Radio New Zealand the rebels have never asked for anybody to go to Syria to fight alongside them, as they have enough fighters. He said people who want to help the rebels should instead donate money or help the Red Cross and other humanitarian agencies.

The Prime Minister John Key said a small handful of people wanting to travel to Syria have been stopped at the border, or had their passports cancelled. Mr Key said he could not give a specific figure of people who have been affected at borders, but said it was a small number.

In February the Prime Minister said there were a small number of New Zealanders who had fought with the rebels in Syria, but would not say how many.

On Sunday the Ministry of Foreign Affairs said it would not be releasing any other details about the dead New Zealander, in order to protect the person's privacy and that of his family. It said other material on the case had been withheld for security reasons.

The ministry's statement referred to a public comment made by Syria's Permanent Representative in New York about tourists coming from other countries, including New Zealand, to join the fighting in Syria.

Here's a rough transcript of the comment from Syria's Permanent Representative:

"Nobody could ignore anymore the threats represented by terrorist groups operating inside Syria, through borders with neighbouring countries. Nobody at all. When we insisted on combating terrorism from the beginning, and asked to deal, mainly speaking with the issue of combating terrorism, it is because this is the main threat faced by our own people on the ground. Thousands of innocent Syrians got killed, thousands were wounded, because of so called cross border terrorists, they call themselves roundly speaking jihadists, they are not, they are criminals, mercenaries coming from 83 foreign nations all over the world. For your kind information some of the terrorists who got killed came from Burkina Faso, some of them came for New Zealand, one guy came from Lithuania, so you see, this is just an indication to let you understand how absurd the issue we are dealing with. "

The ministry also said it was aware of another New Zealander, in Australia, who was barred from leaving for Syria by the Australian authorities. 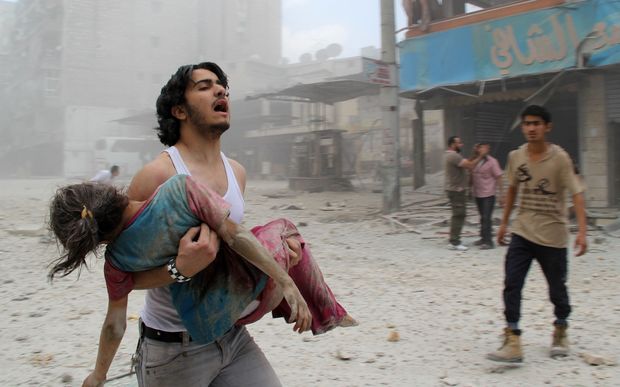 A man carries a girl injured in a reported barrel-bomb attack by government forces in Kallaseh district in the northern city of Aleppo. Photo: AFP

In the latest developments the former peace envoy, Lakhdar Brahimi, has said Syria is descending into a Somalia-style failed state run by warlords.

Mr Brahimi, who stepped down a week ago after the failure of peace talks he mediated in Geneva, said without concerted efforts for a political solution to the civil war there was a serious risk the entire region will blow up.

Mr Brahimi said many countries misjudged the Syrian crisis, expecting President Bashar al-Assad's rule to crumble as some other Arab leaders' had done.