John Banks looks set to be able to stay in Parliament until it rises before the general election in September. The ACT MP was on Thursday found guilty of filing a false electoral return in relation to his failed Auckland mayoral campaign in 2010.

The Crown said the MP for Epsom knowingly filed donations from SkyCity and internet businessman Kim Dotcom as anonymous, even though he knew where the money came from. Banks' lawyer plans to ask for a discharge without conviction. 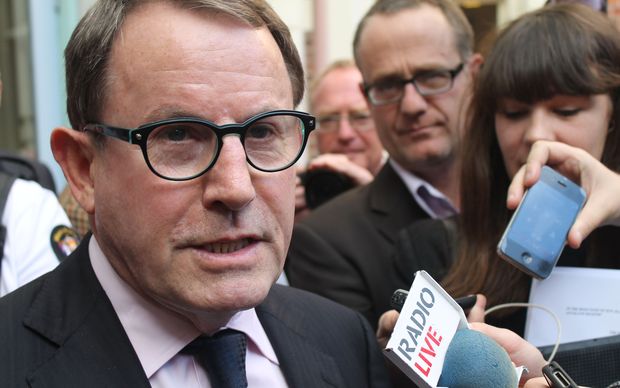 Justice Wylie also rejected accusations by the defence that Kim Dotcom and others were behind a campaign trying to unseat John Banks and bring down Prime Minister John Key. He said he considered that Mr Dotcom, his estranged wife Mona Dotcom, and their former bodyguard Wayne Tempero as reliable witnesses.

As he stood to receive the verdict, Banks blinked and jutted his chin into the air when the word "guilty" was read out.

The MP faces a maximum sentence of two years' jail or a fine of $10,000. Such a conviction would trigger a rule for the MP to give up his seat, but his lawyer on Thursday asked Justice Wylie for the conviction not to be entered.

That means Banks can stay in Parliament for the rest of the term, as the day it will be decided if he is convicted won't happen until 1 August - the day after the House rises before the election on 20 September. Banks has already stated that he won't stand for Parliament again.

Radio New Zealand understands Banks is to seek a discharge without conviction. The judge will then decide whether the consequences of a conviction would outweigh the seriousness of the crime. If the judge rejects the application, he will be convicted. 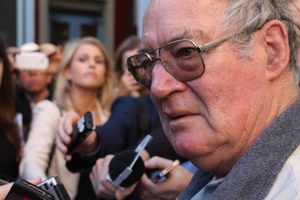 Outside court, John Banks said he was surprised by the verdict and would look at what he could do next. He repeated his claim that he would never knowingly file a false return.

"We were hoping that it would become a very sunny day. We are disappointed with the verdict. We are surprised with the result. Now ... I talk to my legal team David Jones, QC, about options that we have going forward."

Retired Wellington accountant Graham McCready was behind Banks being charged and originally took a private prosecution over the matter after police refused. The case was later taken up by the Crown.

Mr McCready told Radio New Zealand's Checkpoint programme on Thursday it had been a long road, but he was "stoked" with verdict. Pursuing the case had taken a toll on his life and health, he said, but he did not regret it.

"I wouldn't have it any other way. I've been an advocate for 50 years and this is, I guess, my finest hour."

Read the decision in full

No problem for Government - PM

Prime Minister John Key on Thursday refused to go into detail about the Banks verdict, but said the stability of the Government won't be affected by it, despite the MP being part of its support agreement with ACT.

"Whatever the result, the Government will still command the majority and there's no impact on our capacity to govern. We have more than enough votes in terms of confidence and supply ... whatever the outcome we'll be able to govern in a stable manner."

Mr Key said the Government has a much larger majority because it enjoys the support of the Maori Party.

ACT sticking by 'man of integrity'

ACT president John Thompson says he continues to support the party's only representative in the House.

Mr Thompson said he has always seen John Banks as a man of integrity. "He has represented the ACT values in Parliament very well. But you have to remember that this dates back to 2010 before John was a member of ACT or indeed representing Epsom for ACT in Parliament."

He said the party would take over Banks' electorate office if he was forced to resign as MP.

The Electoral Act says when an MP is convicted of an offence that carries a maximum sentence of two years' imprisonment or more, their seat is declared vacant. Normally there would then be a by-election, but because there are only three months until the general election, the Epsom seat is likely to be left vacant.