Hundreds of people have turned out to farewell Auckland woman Blessie Gotingco whose body was found near her North Shore home two weeks ago.

Mrs Gotingco went missing on her way home from work in central Auckland on 24 May. Her body was found two days later at a cemetery not far from her home in the suburb of Birkdale.

A requiem mass for the 56-year-old was held at St Mary's Catholic Church in Northcote on Thursday where friends and family wore small green ribbons - her favourite colour.

John Gotingco told those gathered he feels his mother's death is a bad dream.

"The road ahead will be difficult and there are more rough seas to sail before justice is served. But we will endure. I promise to raise your grandson as you did us - with a steady guiding hand with equal parts of love and tenderness. You are gone in body, but I know you will always be with us in spirit."

Mr Gotingco thanked to the community and police for their support.

People have been shocked by the killing, with strangers leaving flowers at her home and offers of help for the family from around the country.

Last Saturday night, 2000 people took part in a candle-lit walk through Birkdale in her memory.

A man who appeared in court last week charged with Blessie Gotingco's murder is due to appear in court again later in June. 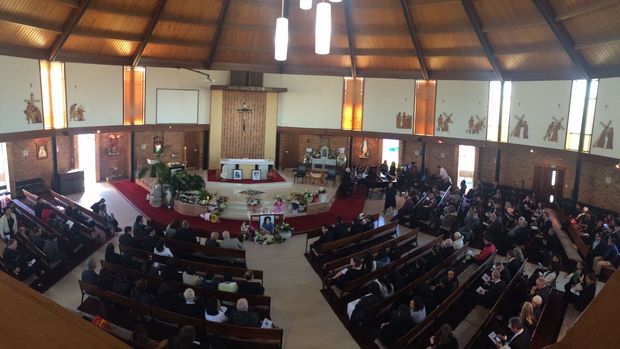 The funeral was held in Northcote. Photo: RNZ / Mani Dunlop