A New Zealander whose company is planning to put in a bid to look for the missing Malaysia Airlines flight believes the search could take nine months.

Private companies will be in the running to find Flight MH370, which disappeared on 8 March this year with 239 people aboard after taking off from Kuala Lumpur for Beijing. 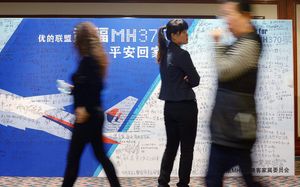 The Australian government has cancelled its search off the West Australian coast in the southern Indian Ocean, saying the Boeing 777 is not in that area.

There are now doubts about the source of acoustic 'pings' originally thought to have been coming from the plane's 'black box' recorders in the area in April.

Seattle-based New Zealander Rod McCallum said his company will use satellite information, but it would be early August before any searches led by the private sector begin.

The Australian Transport Safety Bureau said it would now re-analyse data to decide how the search for the missing plane will continue.

China is urging Malaysia to play a leading and co-ordinating role to put in place a new search plan and push the investigation forward. Most on the missing plane were Chinese.