ACT MP John Banks will have to wait until next Thursday to find out what his political fate is. 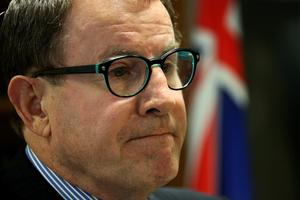 Mr Banks has been on trial in the High Court at Auckland charged with filing a false electoral return after his failed Auckland 2010 mayoral campaign.

Justice Wylie has reserved his decision.

Mr Banks' lawyer, David Jones, told the court in his closing arguments there was no motive for Mr Banks to record donations he knew about as anonymous.

He said that, by contrast, Mr Dotcom blamed the Government for the police raids on his home and had said he wants to destroy Mr Banks and Prime Minister John Key, as well as un-seating the Government.

But Crown prosecutor Paul Dacre said Mr Banks engineered a situation to make sure the donations were kept from his campaign team and recorded as anonymous.

Mr Banks engineered a situation with his campaign team to make sure donations from SkyCity and Mr Dotcom were kept secret, Mr Dacre said.