Government figures show Maori and Pasifika are taking longer to pay their student loans back and earn far less than Pakeha when they enter the workforce.

Maori and Pacific students take more than eight years to pay back their student loans - two years longer than their Pakeha counterparts. 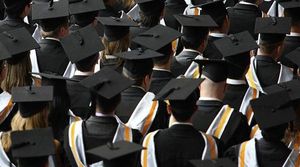 While most Pakeha students go on to do bachelor's degrees, most Maori and Pasifika students opt for qualifications such as certificates and diplomas.

The Pro Vice-Chancellor of Humanities at Massey University, Paul Spoonley, said the income gap after study reflects changing values in the labour market over the past three decades.

The income of those who graduate from secondary school has gone down over the past 30 years, while the income of people with bachelor's degrees rose about 20 percent, and with PhDs increased 32 perecent, he said.

Professor Spoonley told Radio New Zealand's Nine to Noon programme the gaps in income and student loan payments would be narrowed if students got career advice much earlier in secondary school.